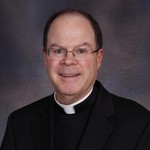 Monsignor Gregory N. Smith is pastor of Christ the Redeemer Parish in West Vancouver and the director of the Archdiocese of Vancouver’s first formation program for permanent deacons. He studied canon law at the Catholic University of America in Washington, D.C., from which he graduated with a licentiate, and in Rome at the Pontifical Gregorian University, from which he received a doctorate degree. His doctoral thesis, The Canonical Visitation of Parishes: History, Law, and Contemporary Concerns, was published by the Tesi Gregoriana in 2008. He is a priest of the Archdiocese of Vancouver, and has served as its Chancellor, Episcopal Vicar, and Moderator of the Curia.