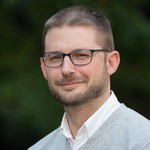 Nicholas Olkovich comes to Vancouver from the Faculty of Theology, University of St. Michael's College in Toronto where he taught and served as Director of Field Education and Pastoral Formation from 2015-2017. During his MDiv and PhD programs, he served as parish catechist and RCIA Director at a large parish in Toronto's west-end.

Nick teaches in the areas of foundational, systematic and pastoral theology. His ongoing research focuses primarily on the relationship between ethics, politics and religion in democratic contexts and on a variety of issues in theological anthropology, fundamental ecclesiology, and foundational theology. His teaching and research is strongly influenced by the work of Canadian Jesuit philosopher and theologian Bernard Lonergan.

“Complicating the Reception of Lonergan on ‘Sacralization and Secularization,’” Irish Theological Quarterly, forthcoming

"Solidarity and the Possibility of Global Human Rights," in Everything is Interconnected: Towards a Globalization with a Human Face and an Integral Ecology. Milwaukee: Marquette Univ. Press, 2019 (57-78)

“Vatican II and Thomist Revivalism: MacIntyre and Lonergan on the Dialectic of History,” in The Promise of Renewal: Dominicans at Vatican II. Adelaide: Australasian Theological Forum (ATF Press), 2016 (159-183)

“Politicizing Religion: Cavanaugh, Levinas and Lonergan in Dialogue,” with Matthew Eaton and Michael Buttrey, in Didaskalia 25 (2015): 103-127