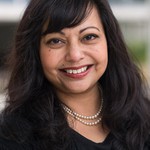 Dr. Bose completed doctoral studies on Victorian Theatre and Oscar Wilde at the University of Birmingham in England and has been teaching in the University of British Columbia’s (UBC) Department of English Language and Literatures since 1999.

Her teaching interests include Victorian Drama and Novel, Children’s Literature (especially British) and general drama. Dr. Bose’s recent interests in Victorian literature and culture have been in exploring how Victorian writers of fiction and drama responded to new scientific discoveries and new encounters with people in countries with unfamiliar cultures.

Dr. Bose is very excited to be teaching at Corpus Christi-St. Mark’s and enjoys having the chance to explore literary questions in small classes.

“The Invisible Academic: the Erasure of the Academic as Professional in the Corporate Academy.” Conference Proceedings. Ed. Steven Weber.

"For Their Native Sisters: The Wesleyan Ladies' Auxiliary in India." In Faces of the Feminine in Early, Medieval and Modern Times, ed. Mandakranta Bose. New York: Oxford University Press, 2000.

"The New Woman in the 1890s," Journal of the English Department, Calcutta University, 2005.