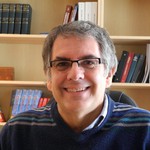 Axel was raised in Vancouver and attended UBC. He taught grade 5 in Lillooet, BC.

Axel studied at Regent College, with a thesis on Paul’s opponents in Colossae. He was a pastor in Baptist churches in Jasper and Calgary, Penticton, Victoria, and West Vancouver (currently). He has worked in United and Presbyterian churches as well. His DMin was in disciplemaking. Axel completed his PhD dissertation on a little-known French Catholic bishop, Gérard Roussel, who was sympathetic to Protestant concerns during the sixteenth century but would not separate from the Catholic church. He was a professor of Supervised Ministry at Carey Theological College for 8 years, teaching all his courses online. He has taught in Guatemala, Indonesia, Kenya, and the Vancouver School of Theology (Reformation History). In addition to all this, Axel coached youth soccer at the provincial level for 4 years.

Curious students are a joy of his—almost as much as his 4 grandchildren! Axel looks forward to examining the dynamic story of the church in the ancient and early medieval period to ask ourselves what we can learn about life and faith in the twenty-first century.

Publications
‘“Christian Society”: A More Influential Concept Than Often Understood?’ in Illumine: The Journal of the Centre for Studies in Religion and Society Graduate Student Association, v. 6, no. 1 (2007), pp. 16-22. (Online version: www.csrs.uvic.ca)

Melanchthon and Bucer: Compromisers or Peacemakers? Public Lecture Series, Centre for Studies in Religion and Society, University of Victoria, November 22, 2006.

Presentation on an approach to educational philosophy that can undergird online education, Peer Group on the Values of Online Education, Association of Theological Schools, Chicago, October 7, 2016.

“The Misuse and Use of Power for Christians.” School of Mission, Hillside Baptist Church, North Vancouver, October 5, 2017, November 22, 2018.

“How to Handle Opposition.” School of Mission, Hillside Baptist Church, North Vancouver, May 16, 2019.

“And Keep Your Sense of Humour.” Conference on “Christian Witness on Cascadian Soil,” St. Andrews Hall, Vancouver, May 11, 2019. Reflections on one year of rapid church renewal involving congregational discernment.