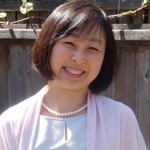 Her dissertation, Through the Kaleidoscope: Uchiyama Bookstore and Sino-Japanese Visionaries in War and Peace is a transnational story of a bookstore in Shanghai, run by a Japanese Christian, frequented by Chinese customers during the war with Japan. Her current research interests include the use of Japanese-language sources in writing Japanese-Canadian history.

“Postwar Japanese Texans” in Asian Texans: Our Histories and Our Lives edited by Irwin Tang, 2008.